Tests by the U.S. Department of Agriculture found that nearly 70 percent of conventionally grown produce is contaminated with pesticide residues.

But there are stark differences in the number and amount of pesticides on various types of produce. The Environmental Working Group (EWG) offers a Shopper’s Guide to Pesticides in Produce that lists the “Dirty Dozen” fruits and vegetables with the most pesticide residues, and the “Clean Fifteen”, for which few, if any, residues were detected. (Note: Make “Dirty Dozen” and “Clean Fifteen” hypertext that link to the lists: https://www.ewg.org/foodnews/dirty_dozen_list.php, https://www.ewg.org/foodnews/clean_fifteen_list.php) 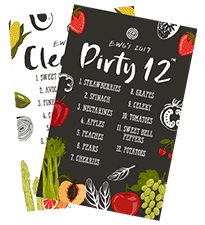 For the Dirty Dozen list, EWG singled out produce with the highest loads of pesticide residues. This year’s list includes, in order, strawberries, spinach, nectarines, apples, peaches, celery, grapes, pears, cherries, tomatoes, sweet bell peppers and potatoes. Each of these foods tested positive for a number of different pesticide residues and contained higher concentrations of pesticides than other produce. Pears and potatoes were new additions to the Dirty Dozen, displacing cherry tomatoes and cucumbers from last year’s list.

In addition and separate from the list, hot peppers were found to be contaminated with insecticides toxic to the human nervous system. EWG recommends that people who frequently eat hot peppers buy organic. If you cannot find or afford organic hot peppers, cook them, because pesticide levels typically diminish when food is cooked.

We urge you to use these lists to help you choose foods lower in pesticide residues.